It is believed that in the middle ages (possibly from the 12th or 13th centuries) there were several frescoes of saints painted onto the inside, plastered church walls. Underneath the arch was painted an abstract design and this is still in a reasonable condition. Unfortunately no written record was kept of these paintings. It is not possible to say what or who is depicted in the remains of a painting above the North door. There have been different theories since 1880.

An account written in October 1880, just after the re-opening of the restored Saxon Church, states: 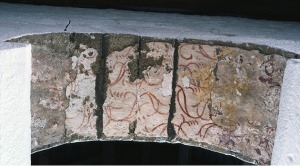 “ In the early part of the 13th century……..the church was plastered inside and outside. The object of plastering it inside was partly, in all probability, that the walls might be covered with paintings, and fragments of these remain. One very large one over the North door, in the centre of the nave, appeared to me to represent the ascension of our Lord, or the assumption of some saint, but a friend standing by me on Monday suggested, from the size of what he took to be a foot, near the bottom of the painting, that it might be a representation of St Christopher carrying the infant Jesus. I am afraid it is too far gone to enable one to arrive at any satisfactory conclusion regarding the subject.”

The Church Monthly had an article on the church in 1895 where A.E. Burn writes,

“The walls were covered with frescoes at one time, afterwards overlaid with plaster, but now the last picture is crumbling away. It is supposed to represent the vision of St. John in Patmos.”

An article by Thomas Ball in February 1930 states:

“It may be assumed that the painting in Escomb above the North door was in fairly good condition in 1880 when the old church was re-opened, as the portion of plaster containing the painting was spared and cleaned. The destruction of much of the wall plastering and painting was the result of the seventeen years neglect, during which time much of the southern part of the roof had collapsed, including a crude false ceiling at the level of the main beams…..

In addition to the painting in the chancel arch and above the North door there appear to have been six other paintings in the nave. A statement by the late sexton, Mr Kirby, in 1914 refers to the church as he knew it following his appointment in 1862. He claimed that the frescoes were all paintings of saints.”

The following notes were made in 1914:

“Above the North doorway….there are the remains of a painting supposed to be the representation of St. Wilfred. …..Since the re-opening of the church in 1880, a destructive process has gone on, the plaster imperceptibly falling away in the form of dust and sand, and has carried with it the lower portion of the figure, until at this date, 1914, there only remains the portion from the hips upward. In addition the outline of the right side is uneven, jagged and marred, while the right arm has entirely disappeared. The remainder shows up definitely the brown and blue, with their varying shades together with fleshy tints for the face and remaining hand. The attitude or poise of the figure appears to be one of prayer, rather than that of teaching, benediction or blessing. There is no halo round the head.”